The Minivan, the Couple and The Cops

The most interesting story wasn’t the one I told for the team building game and its participants.  The fight started across the street.  A very pudgy woman strode from minivan, screaming and cursing.  Every other word was F*** you.  Her slim guy in shorts stood at the open car door saying “What’s wrong, get back in the car.”  She fumed in a door well for several minutes, continuing to scream obscenities at him.  I didn’t blame him not getting too close, considering her temper.  And the fact she’s 3 times larger round than him.

Then, still screaming at the top of her lungs how he ruined her day and she’d got nothing done due to him, she strode north.  Oblivious to traffic, she strode right across the street.  Luckily, no cars were coming.  Her guy followed 20 paces behind, asking “Where are you going, come back.”  They disappeared into an alley and didn’t feed their parking meter.

10 minutes later, the pudgy woman appeared in the restaurant door near my spot under the eaves in the vacant outdoor seating area.  It’s a rainy gray summer day in Seattle.  She blurted out, “I’m hungry”, then strode down the street south, past me.  I thought, well, if you stopped screaming at your guy, you’d get lunch.  Actually, she looked like she needed to skip a few lunches.  She retrieved her coat from the minivan and strode back up the street north, continuing to scream at her guy.  He remained at the minivan, begging her to return to it.  They still neglected to feed the meter.

I regale the two game groups who stop by on their “mission” with my story.

All the screaming finally attracts the cops.  A Seattle police cruiser sits in front of the minivan.  Two officers engage the fighting couple.  The officers watch while the pudgy woman feeds the parking meter.  Her guy walks north and stands 20 paces away.  He never gets too close to his highly volatile partner.  It takes over 10 minutes to feed the meter.  I wonder what she is piddling around at.  Either she can’t figure it out or she’s stalling till the officers leave.  My vote is stalling till the officers leave.   She out lasts the officers, who leave before she completes the meter feeding.

She leads the way north again with her guy 20 paces behind and there is silence.  Until my next game group shows up, soaking wet and I tell the story of Andrea Anarchy and her biker hubby, Tony. 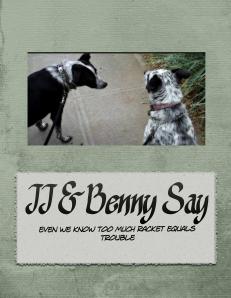 Hi, I'm Kris. A narrator, actor, voice actor, and writer. I've impersonated a cat, a prince, a princess, a witch, a madwoman, and a president with my voice and narrated/produced over 40 audiobooks. I narrate and produce an award-winning weekly storytelling podcast showcasing stories from fantastic writers. Visit my IMDB page for stage and screen credits.
View all posts by kriskkaria »